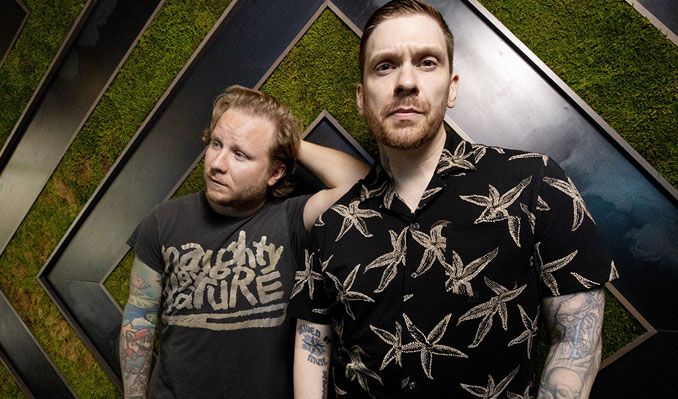 All such events beginning 10/1/2021 will require attendees to show evidence of their full vaccination with a vaccine authorized in the US or recognized by the WHO. Full vaccination means 14 days or more have passed since the attendee has received a single-dose vaccine or the second dose in a two-dose series. Acceptable vaccination documentation may be a physical copy of a COVID-19 Vaccination Record Card, a digital copy of such card or such other proof as is permitted locally. All attendees are encouraged to wear a mask indoors, per CDC guidance. For more information and FAQ's about this policy, visit aegpresents.com/health-policy

Smith & Myers is an acoustic side project from multi-platinum rock band Shinedown frontman Brent Smith and guitarist Zach Myers. When Shinedown decided to host a contest where fans could submit a song they’d like to hear the band cover acoustically, the group had no idea the huge response they would receive.  Rather than chose just one to record, they narrowed down the submissions to six songs; eventually revealing four more at a later date.  The result was “The Acoustic Sessions” EP, released in 2014, featuring the two musicians covering various genres from Otis Redding’s “Sittin’ On The Dock of the Bay” to The Clash’s “London Calling.”  The tracks were accompanied by YouTube videos of the duo performing each song.

Leading the charge for 21st century rock,  multi-platinum, record-breaking band Shinedown - Brent Smith [vocals], Zach Myers [guitar], Eric Bass [bass, production], and Barry Kerch [drums] – has sold more than 10 million albums and 10 million singles worldwide, has 11 platinum and gold singles and four platinum and gold albums, 13 #1 active rock hits, and averages more than 4 million monthly listeners on Spotify as one of the most-listened-to rock bands on the platform with over 600 million streams, contributing to their more than 1 billion total overall streams to date. Every single released throughout the band’s career has hit Top 10 on the rock charts – an unparalleled feat.

Official WebsiteFacebookMore Info
*Service and handling fees are added to the price of each ticket.